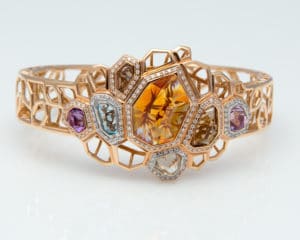 The origin of birthstones are somewhat murky, but most theories have spiritual, religious and/or astrological roots. In addition, the concept of birthstone jewelry can be found in both Western and Eastern traditions. Over the centuries, people have believed stones associated with your birth month are a source of good luck and are beneficial to the wearer. Furthermore, this tradition dates back centuries and spans many different cultures.

Where Did The Idea of Birthstones Come From?

One popular belief dates back to the breastplate of Aaron described in the book of Exodus as being encrusted with twelve stones representing the twelve tribes of Israel.

Obviously, cultures aside from the Judeo-Christian have contributed to our modern idea of birthstones as well.

Here is the current official birthstone list as it stands in 2019. See more lists we have compiled for you below under Two Lists Are Better Than One, including the modern and the traditional lists.

As you may have noticed, there can be a variance in the gems listed as birthstones for each month. For example, you’ll find December’s birthstone could be turquoise, tanzanite, blue zircon, lapis or blue topaz. Since ancient times, during the origin of birthstones, colors have been highly symbolic and significant. So, people chose their stones based on a specific color and availability. And so, myriad of stones have been recognized over the centuries by many groups. Therefore, leading to the idea to organize a standardized birthstone list.

We’ve come a long way from the origin of birthstones to our current modern list. However, the current list is not fixed. There are still occasional additions or changes. For example, the Jewelry Industry Council of America has updated the official list three times, as posted below. Once in 1952, 2002 and 2016.

With 2016’s addition of spinel,  JA’s President commented that, “At certain moments in history, when there is a strong call from gem enthusiasts to expand the list of official birthstones, Jewelers of America believes in recognizing the importance of historically significant gemstones and giving gemstone lovers a choice that suits their preferences.”

No matter the origin of birthstones, many people like to wear jewelry that bears their birthstones. High school and college students wear them in their class rings. Plus, it’s common for mothers to wear necklaces or rings featuring the birthstones of all their children or to receive baby “bump” gifts incorporating the baby’s birthstone. Currently, one of our favorite pieces of mother’s jewelry is the Tree of Life set with birthstones.

Come into Copeland’s and we’ll guide you to the perfect birthstone creation for yourself or a loved one. Whether you’re wanting a traditional birthstone pendant or mother’s ring or a one-of-a-kind custom piece, Copeland Jewelers is here to help!