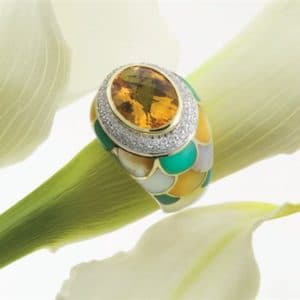 Here’s a list of words you probably had no idea were used to talk about jewelry!

In common parlance, bail is usually either the act of giving up on something or someone or money paid to get someone out of jail until their trial. In jewelry, however, bail is part of a pendant. It’s the metal loop at the top of the pendant that a chain or cord passes through so the pendant can hang. The bail can be decorated or purely functional.

In daily usage, depth is a measure of how deep something is. Its jewelry usage is similar – depth is the measurement of how tall a faceted gemstone is, from its flat top surface to its bottom point.

Rather than actual the metal object attached to a door for the purpose of knocking, door knockers in jewelry are a style of earring that looks like a traditional door knocker. Their two pieces – a round or oblong shape attached to the post that goes through the hole in the ear and a loop that hangs down below the earlobe – are connected to each other by a hinge.

It’s not just the hard, white substance on the outside of your teeth! Enamel is also a powdered glass that is fused to metal, pottery, or more glass. It creates a smooth, glossy, usually brightly colored surface.

A girdle isn’t just an undergarment worn to support and/or shape the torso. It’s also part of a faceted stone. Think of a traditional gemstone shape, with a flat top that slopes down at a wide angle, then slants sharply like an upside-down cone to a point. The girdle is the edge (sometimes sharp and sometimes smooth, depending upon how the stone is cut) where the wide, flat, top section of the stone meets the taller, pointed bottom section.

In jewelry, ropes aren’t used for tying, pulling, or climbing. A rope is a long necklace, usually thirty-seven inches or more. It creates a dramatic look and is a great choice for a formal occasion. Ropes of pearls are sometimes looped around the neck twice to create a shorter, layered look. Rope necklaces made out of metal, such as gold or silver, often have intricate designs, such as a twisting pattern similar to the fibers in a traditional rope.

This is no sloping, flat surface found on a playground or at the swimming pool! Slides in jewelry are similar to pendants since they’re large decorations worn on chains or cords. However, unlike a pendant which has a bail in the top that allows it to hang down, a slide has a loop molded into the back of it through which the chain or cord passes, so a slide sort of sits evenly on the chain or cord, rather than dangling.

At Copeland Jewelers, your Austin jewelry store, we’re all about everything that has to do with jewelry, even if it has to do with other things too! If you have any questions about jewelry terms, call us or come in today. And if you’re interested in designing a piece of jewelry that uses any of the words defined here, let us know, because we love to create Austin custom jewelry!