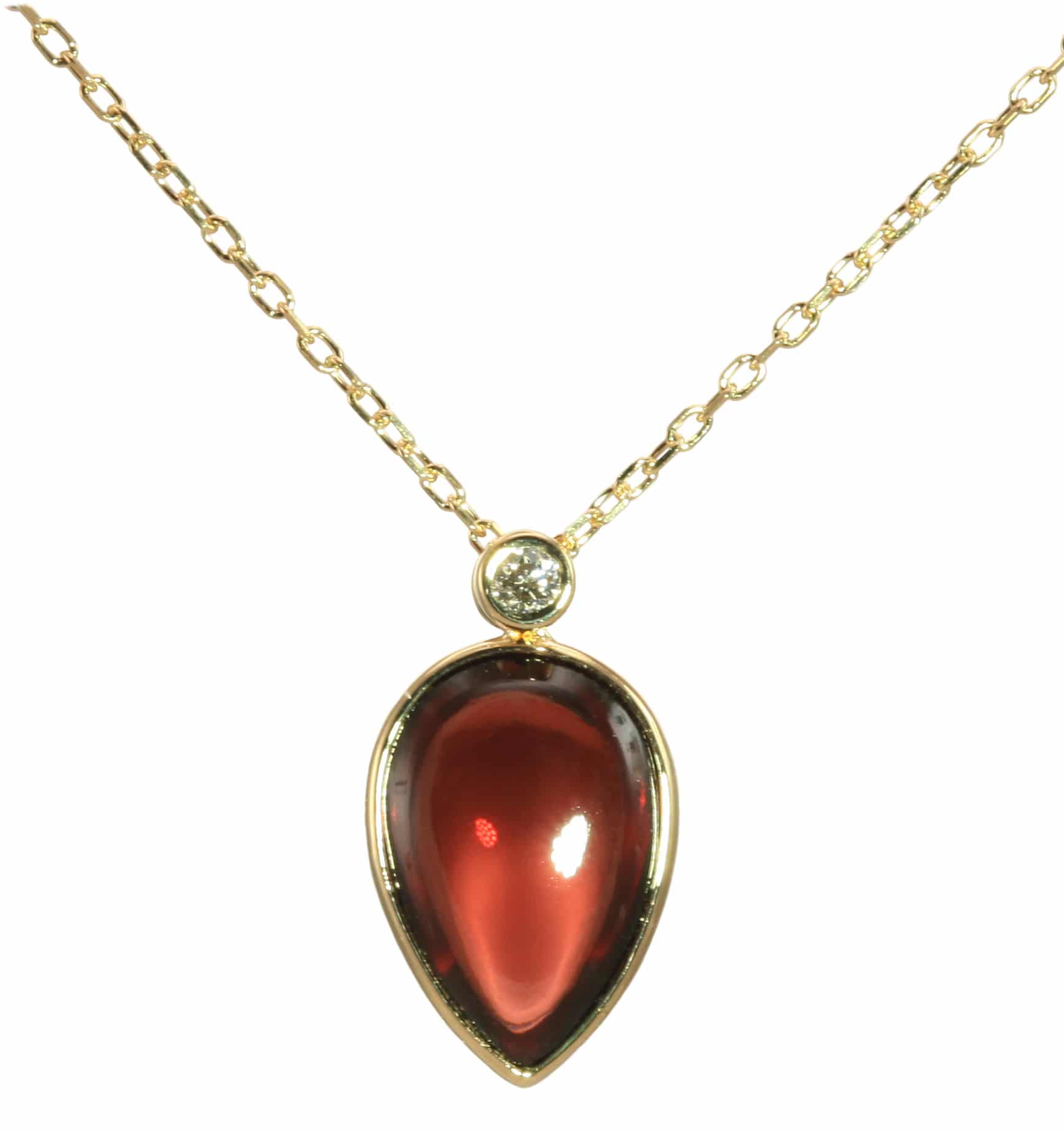 Born in January? You’re lucky to have such a versatile gem for your birthstone. January’s birthstone, Garnet, is a sturdy gem that comes in a variety of colors.

Its name comes from the Latin word “granatus”. It refers to the deep red grains or seeds of the pomegranate. In addition, Garnet is also the gem for the 2nd wedding anniversary.

Check out the birthstones for other months.

At Copeland Jewelers, we are all about colored gemstones. As a local, hands-on jewelry store, you can actually experience these gems. Our customers are excited about seeing our different types and colors of garnets!

January’s birthstone Garnet is most commonly found in deep shades of red. However, it actually comes in a wide variety of colors.There are many shades of reds and pinks but, beyond reds? Look for vivid greens, purple, yellow, brown, orange and even blue.

5 Gem Quality Types of Garnets and Their Colors

There are over twenty garnet species. However, only five of them are of gem quality. Let’s look at them in regard to color.

In addition, all garnets are a mixture of more than one species. Consequently, you get an endless blending of color variations. For example, rose-colored Rhodolite is a mix of almandine and pyrope. Incidentally, fine quality Rhodolites are a stunning rose or purplish-red color.

Finally, these gems display a color change similar to rare Alexandrite. You may be lucky enough to see a color change Garnet someday. If so, it’s likely to change from blueish to purple. It all depends on the lighting.

Other colors include mint-colored Merelani, orange Mandarin, and reddish-orange Hessonite. The list goes on!

Where Do Garnets Come From?

Garnet, a true gemstone of the world. It’s found in different locations all over the globe.

Some make beautiful gems but it’s also used industrially due to its rugged properties. Duties like filtration, abrasive coating, grinding, and abrasive air blasting are commonly performed with Garnets. Now, that shows how useful a gemstone can be.

So, feel confident in wearing this gem. You’ll get many years of enjoyment from January’s birthstone, Garnet.

Garnet is believed to strengthen relationships and trust. Many consider Garnet capable of promoting health and regeneration. Garnet has previously been used to balance energy and inspire love. On the physical level, some consider it able to cure inflammatory diseases as well as protect you from poison or even nightmares.

Versatile stones from the Garnet family have been used since before the Bronze Age for jewelry and abrasives.

The Best Way to Care For Garnet Jewelry

Garnet is a durable stone and though it is a tough gem, it should not come in contact with extreme temperatures or chemicals. Carefully store them so they don’t rub against other gems such as Diamonds, Sapphires, and Rubies that can scratch them. On the other hand, your Garnets could also scratch other softer stones in your jewelry box.

Use mild soap and water with a soft toothbrush to clean your Garnet jewelry.

The value of a Garnet depends on a number of factors including the type of Garnet, its rarity, and most important being the color. Additional things considered would be its size and the clarity of the stone.

Fun Fact: Did you know the largest Garnet crystal was found in a New York City excavation in 1885? Unfortunately, it’s known as the “Sewer” or “Subway” Garnet due to conflicting stories about its origination. However, documentation from an 1885 New York Academy of Sciences meeting makes the most sense to us. It reports on “a large Almandine Garnet, seven inches in diameter, and nine and one-half pounds weight”. It was found during an excavation on 35th Street, between Broadway and Seventh Avenue. The American Museum of Natural History in Manhattan currently houses the gem.

Do you want to buy a garnet or get one appraised? Visit our jewelry store in Austin, Texas, to consult with our very experienced professionals. At Copeland Jewelers, we specialize in custom and designer jewelry, estate & vintage jewelry, professional advice, and appraisals.