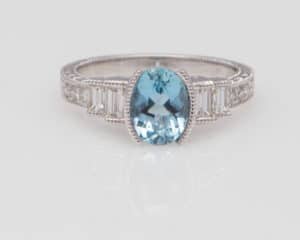 People associated aquamarines with the Greek and Roman gods Poseidon and Neptune. Aquas were believed to make sailors’ voyages prosperous and safe. Carrying them on the seas was common because people believed they would calm the waves. Romans maintained that if you carved a frog into a piece of aquamarine it helped make new friends. Or you could reconcile with an enemy. Ancient Egyptians, Sumerians, and Hebrews wore the stone into battle to ensure victory.

During the Middle Ages, many believed simply wearing an aquamarine would protect one from poisoning. Called “the magic mirror”,  soothsayers said they could draw their power from this stone. Thought to cure ailments of the stomach, liver, throat, jaws, and especially the eyes. Ancient accounts reveal Roman emperor Nero supposedly used a piece of aquamarine as an eyeglass. Later, Germans used clear or nearly colorless aquamarines to make their eyeglasses. Hence, the German word for “eyeglasses” is “brille,” derived from aqua’s mineral family “beryl.” Even today, aquamarines are associated with youth, hope, fidelity, and health, and they’re said to improve mental health and promote tranquility.

Aquamarines occur in a range of blue shades. Resembling water in all its tones, from almost colorless to pale light blue to bright blue-green. Deriving from the Latin “aqua,” meaning “water,” and “mare” or “marina,” meaning “sea.” Very deep blue colors bring the highest price tags. And, larger stones are more likely to have these more intense shades. Even though deeply colored stones are more valuable, beauty is in the eye of the beholder. That is to say, many people love the light blue colors too. You be the judge. Which shade do you prefer?

Unlike their emerald cousins, faceted aquamarines are often devoid of inclusions and as clear as water. Consequently, it’s no wonder aqua symbolizes purity of spirit and soul.

Aquamarine makes a wonderful gemstone for jewelry. Because its color contains little to no yellow, it is complementary to every skin tone.

At 7.5-8 on the Mohs Hardness scale, they are durable enough for everyday wear like wedding rings.

Like diamonds, aquas are evaluated by the four Cs: color, clarity, carat, and cut.

In conclusion, the most highly prized gems have both high clarity with crystalline transparency and deep blue to slightly greenish blue hues.

Where Do They Come From?

Aquamarines and emeralds are from the same mineral family, beryl. Six-sided aquamarine crystals of up to a foot long are found growing in rock seams. Obviously, these large, clear crystals are ideal for making statement jewelry that features sizable gems. Mined around the world, including in Colorado, Maine, North Carolina, Nigeria, Madagascar, Zambia, Mozambique, India, Pakistan, Russia, and Colombia. However, they are most abundant in Brazil – a 240-pound aquamarine was once found there!

Aquamarine makes for beautiful jewelry any time of year, and it’s especially appropriate to celebrate a March birthday. If you’re desiring this lovely blue stone? Call or visit our store today! And remember, we are your number-one source for custom jewelry in Austin. We’d love to help you create a fabulously unique aquamarine setting!