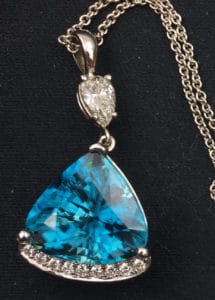 The December birthstone, Blue Zircon, is the most popular among Zircon’s many colors. Because of the demand, it’s also the most expensive.

However, this gemstone’s color palette is quite varied. If you’d prefer a yellow, green (the rarest form), red, or reddish-brown zircon we can help you find it.

At Copeland Jewelers we’re excited to show off our fabulous custom made blue zircon pendant. Crafted by Clay Copeland, it’s an original and one-of-a-kind. Come by and see it before it’s gone.

Zircons have a high refractive index and strong dispersion. Consequently, few gems match Zircon’s intense fire and brilliance, surpassed only by Diamond. Therefore, especially in the early 1900s, colorless Zircon has been used to mimic Diamonds. However, do not confuse it with the cheap synthetic Diamond substitute, Cubic Zirconia (commonly known as CZ’s).

Zircon ranks in the medium range on the Mohs Hardness Scale at a 6 to 7.5. In addition, Zircon is brittle. So it doesn’t do well with knocks. We recommend wearing any Zircon rings carefully. It may be better to show off your Zircon in a pendant or earrings.

According to scientists, Zircon is the oldest mineral on earth. People have carved Zircon for centuries. It’s called Ligure and is listed as one of the stones on the Breastplate of Aaron in the Bible.

Blue Zircon was favored in Victorian times. Brits frequently featured these fine gemstones in jewelry during the 1880s.

Notably, George Kunz was a renowned gem buyer for Tiffany & Co. Because he was an enormous fan of Zircon he was compelled to promote the gem. Due to Zircon’s fiery brilliance, Kunz wanted to re-name it “Starlite”. Unfortunately, the name didn’t catch on.

Scientists are even finding clues from Zircon about the formation of our planet. Dustin Trail of the University of Rochester describes Zircon as, “our only window into the formative stages of our planet.” Zircon from Australia confirms our planet’s crust formed at least 4.4 billion years ago. And, as the oldest piece of Earth ever found, its crystals contradict the traditional theory. We used to think the planet’s first 500 million years were violent volcanoes and oceans of magma. Instead, it appears the Australian Zircon formed in water, maybe even an ocean. Therefore, it’s possible life evolved much earlier than we thought. On a cooler, wetter Earth than was previously believed.

The December birthstone, Blue Zircon, is found in Myanmar (Burma), Madagascar, Vietnam, Sri Lanka, Australia, Canada, France, India, and Russia. Most of the finest Blue Zircons are found in Cambodia and Thailand. People typically find them as waterworn pebbles in gravel deposits.