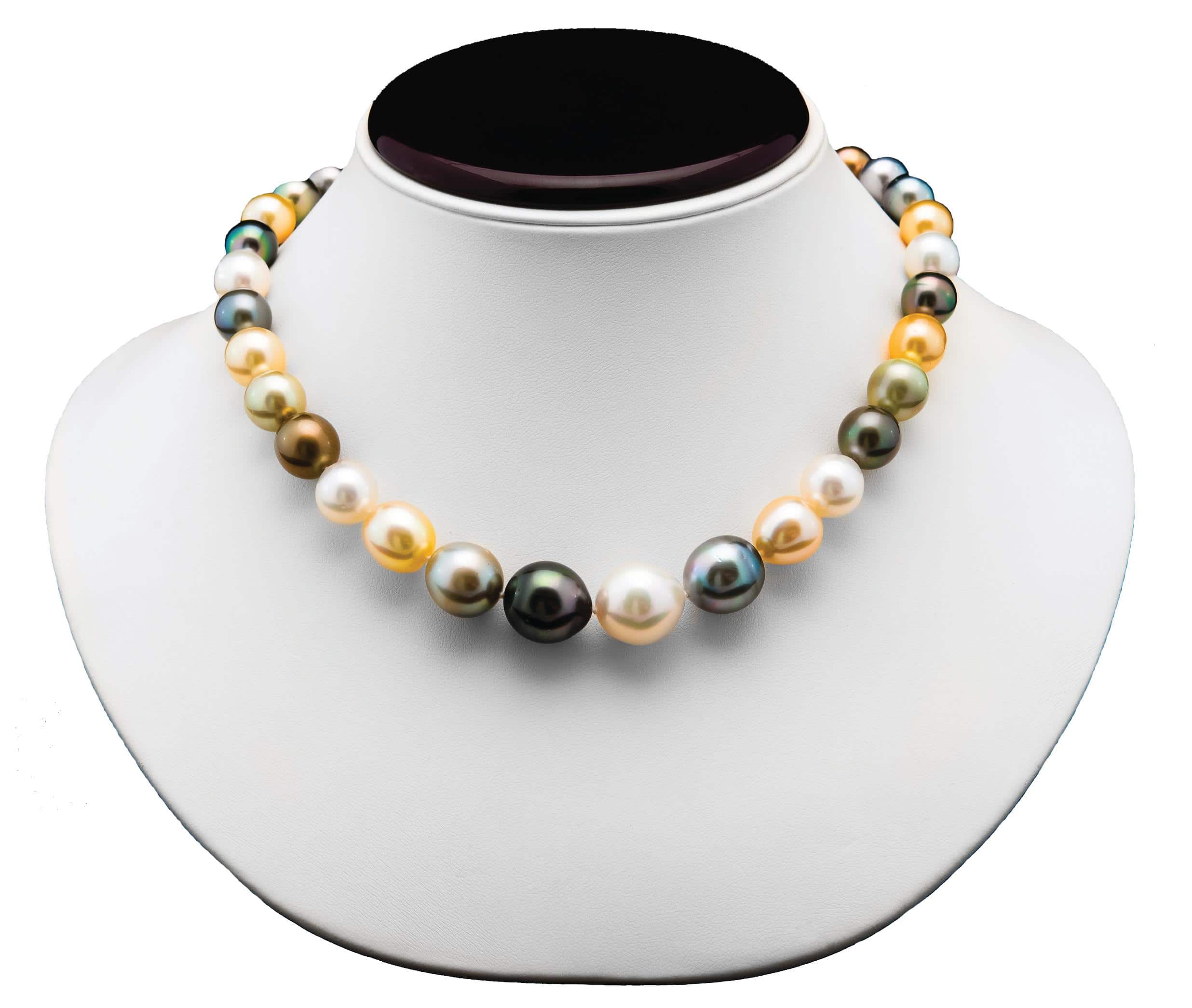 We discuss natural pearls, what they are and how they differ from their counterparts.

Real natural pearls are composed entirely of nacre (a combination of aragonite and a naturally occurring binder called conchiolin).

An irritant, sometimes just a tiny grain of sand, is trapped in an oyster or other mollusk stimulating the production of nacre. Layer upon layer forms around the irritant until the final pearl comes into being. Consequently, since the irritant in the natural pearl is usually so small the pearl is formed with a very thick nacre. The thicker the nacre the more lustrous the pearl. Natural pearls are very rare and are very pricey.

+ Of these, only a small amount will be gem quality – literally one in a million.

On the other hand, in cultured pearls, the irritant is usually larger and always placed by humans into the mollusk. With the larger irritant, it takes fewer layers of nacre and less time to make a full-size pearl. Therefore, cultured pearls are not rare, but they are much more affordable and still very beautiful.

Freshwater and saltwater pearls form in the same manner.

Present-day natural pearling is confined mostly to the seas off Bahrain in the Persian Gulf. For over 2,000 years these waters have produced pearls.

Today natural undersea beds of pearl-producing oysters are VERY rare! Some wild oysters are still found around Australia who has one of the world’s last remaining fleets of pearl diving ships. And currently, Mexico is beginning to revive some of its world-famous natural oyster beds in an earth-friendly manner.

For thousands of years pearls have been highly prized for jewelry. Some of the earliest and most famous of natural pearl beds were in Mexico. Spanish explorers discovered the pearls being worn by Mexican natives in the mid-1500s. Henceforth, from 1535 to 1821 thousands of pearls were exported to Europe from Mexico on a continual basis. These pearls had no rivals in the world! An article from The New York Times in 1903 says in regard to Mexico’s pearls, they are “the finest jewels of this kind found anywhere in the world”.  Touting that the area is acclaimed and “noted for its fancy pearls – that is to say, the colored and especially the black ones”.

Since marine pearls are still the gold standard for beautiful pearls, the demand remains strong. However, most saltwater (or marine) pearls are cultured rather than natural because historically as well as in today’s world, even the tiniest of natural pearls demands a very hefty price tag.

The secret to matching pearls, including natural pearls, is to match them according to age. Unlike humans, pearls age at the same rate. So choosing pearls of the same age is critical to make sure they match and thereby assuring they all look the same over the life of the strand.

At Copeland Jewelers Austin, Tx our manager has been stringing pearls for over 25 years. We can help you with natural pearls – what you need to know and how to choose the right pearls for your style and budget.