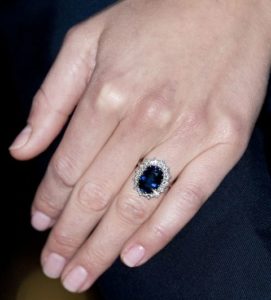 Incredible jewelry pieces have always captured the public’s eye and imagination, often becoming the stuff of fantastic stories bordering on legend. How much do you know about these storied pieces of jewelry? And how does your collection compare?

This beautiful ring, comprising an eighteen-carat sapphire surrounded by small diamonds, was purchased by His Royal Highness Charles, Prince of Wales, for his fiancee, then the Lady Diana Spencer.

It was controversial at the time because the ring was not custom made and could have been purchased by anyone from the Garrard jewelry collection.

Although the marriage did not last, Princess Diana became loved and adored around the world for her humanitarian work and her determination that her two sons have “normal” experiences such as going to McDonald’s.

Prince William later gave his mother’s ring to Kate Middleton when they became engaged, further cementing this piece of jewelry in the annals of history.

The most famous yellow diamond in the world is known as the Tiffany Yellow because it is owned by the Tiffany Co. and is currently on display at their flagship store on Fifth Avenue in New York City.

The diamond was originally believed to be about 287 carats when it was discovered in South Africa in the late 1800s, but it has since been cut down to 128 carats. It has been a part of several different settings over the years and is currently set in an elaborate necklace with numerous white diamonds, which was designed in 2012 to celebrate Tiffany’s 175th anniversary.

The Tiffany Yellow is believed to only have been worn twice, by a Mrs. Sheldon Whitehouse to a 1957 Tiffany Ball and by Audrey Hepburn in publicity photos for the film Breakfast at Tiffany’s.

The Tiffany Co. probably won’t be giving up this iconic stone, but that doesn’t mean your yellow diamond hopes are dashed. If you’re in the market for a beautiful piece with a yellow stone, why not choose this Nasbro ring from Copeland Jewelers, featuring small white diamonds and a large yellow diamond (it’s cushion cut, just like the Tiffany Yellow!). Or ask about our custom jewelry options if you’re in the market for something different.

After divorcing his first wife, Napoleon married Archduchess Marie Louise of Austria in 1810, and he presented her with this stunning diadem as a wedding gift.

It was originally set with 79 emeralds and 1,006 small diamonds. During the 1950s, the emeralds were removed by the French company Van Cleef & Arpels so they could be re-set into individual pieces of jewelry and sold separately. The empty spaces in the diadem were then replaced with Persian turquoise stones, which remain in the diadem, now owned by the Smithsonian Institution, today.

Whatever piece of jewelry or type of stone you’re looking for, Copeland Jewelers in Austin can keep you outfitted in gorgeous, unique designs that are absolutely fit for royalty!