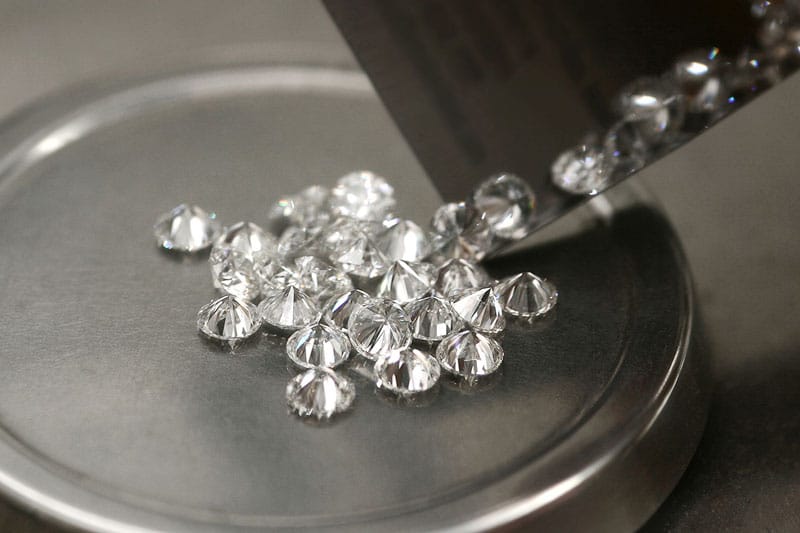 Although you should base your jewelry purchases mostly on your personal sensibilities, the official monetary value of diamonds (and some other gems) is determined by factors commonly referred to as the “four C’s”: Caret, Color, Clarity, and Cut.

Understanding the four C’s of diamonds will help you understand how jewelry is created and how industry professionals determine the diamond quality and diamond grades.

The weight of a diamond is measured in carats, making this C the most objective of the four factors.

In ancient Greece, diamonds and other precious materials were weighed using carob seed. Since they were relatively consistent in size they were used as the counterweights on balance scales.

This practice was called “keration” which is the origin of the word “carat.”

In the early twentieth century, the measurement of one carat was standardized to equal one-fifth of a gram (0.20 g) or seven-thousandths of an ounce (0.007 oz).

A diamond’s weight is measured extremely precisely, so each carat is broken down into hundredths, which are often referred to as “points.” This means that a half-carat diamond weighs 0.50 carats or 50 points.

Once a diamond is set in a piece of jewelry its weight can no longer be precisely determined, but an approximate weight can be determined by examining its outer dimensions.

If multiple diamonds are used in one piece of jewelry, a number for “total carat weight” will likely be used, rather than listing the carats of each stone individually.

How a Diamond’s Cut Effects the Carat

The weight of a diamond does not necessarily correspond to its surface area since the surface area is determined by the stone’s cut.

The cut of a stone is generally designed to maximize color and clarity, and it may cause the stone’s weight in carats to decrease significantly – hence why the four C’s should be considered altogether in determining a stone’s value.

The rarity of diamonds, especially quality diamonds, makes their value relative to their carat size less straightforward than you might expect.

For this reason, if Diamond A and Diamond B have similar colors, clarities, and cuts, but Diamond B weighs twice as much, it’s likely to be three or even four times more expensive than Diamond A.

While a diamond of 0.48 carats and another of 0.50 carats may appear almost identical, the one that is slightly smaller will probably cost significantly less, all other factors being equal.

How Important Is the Carat of a Diamond

While carat is the easiest of the four Cs to define with a numerical value, it should probably be the least important factor in determining what you like and don’t like.

The other three Cs will have a much greater impact on a stone’s appearance, especially when it comes to brilliance and sparkle.

There are two separate categories to discuss when it comes to the color of diamonds: “white” and “fancy”.

White diamonds are what most people think of when they think of diamonds – clear, colorless or almost-colorless gemstones.

In direct contrast to their fancy counterparts, white diamonds are more valuable when they have less color in them. The clearer a diamond is, the better its ability to reflect the colors of the rainbow for us to see.

However, since our eyes detect sparkle before they detect color, color is generally considered secondary to cut when it comes to rating white diamonds’ value.

Most naturally occurring diamonds have some measure of yellow or brown tint, even though they may appear colorless to the naked eye. Truly colorless diamonds are extremely rare and valuable.

An old, complicated, and unreliable system of color classification rated diamonds from A to C and also used Arabic numbers, Roman numerals, and descriptions with words.

To prevent confusion with this old system, current color classifications range from D to Z.

More specifically, the color grade scale goes like this:

These classifications are determined by comparing the diamond in question with a “master” set of diamonds with known ratings under very specific lighting conditions.

The differences between one letter and another are extremely subtle and will only be detected by an expert jeweler or gemologist with a high-powered microscope.

As a rule, diamonds rated J or better will appear colorless to the naked eye.

The setting of a stone will also affect its appearance to the naked eye. A stone that may appear yellowish against white metal will likely look clearer in a yellow-gold setting.

The final piece in determining the color of a white diamond is its fluorescence.

Not all diamonds exhibit fluorescence, but when they do, it means they appear to change color under different types of light, especially direct sunlight or fluorescent light bulbs.

This complicated phenomenon is due to differences in wavelengths of electromagnetic radiation light. This causes diamonds to reflect the light of various colors even when the diamond itself is colorless or near-colorless.

The reflected light is often blue, but it can also appear yellow, orange, or white, and it can even have an oily or milky cast.

It’s very important to view a stone under a variety of lighting conditions before making a purchase from a jewelry store.

Fancy diamonds come in a multitude of bright colors: pink, red, purple, blue, green, orange, yellow, and brown, and all shades in between.

Those in-between shades will be categorized according to their predominant color, so a fancy diamond that is mostly green but has hints of blue will be labeled “greenish-blue,” while the reverse would be “bluish-green.”

A stone in which the two colors are virtually equal will be labeled “green-blue” or “blue-green” (note the absence of “-ish”).

The gradations of color in a fancy diamond are described according to the following scale:

Therefore, a diamond considered “fancy intense purple” would have a deeper color than one labeled “fancy purple.”

Fancy diamonds are rarer than their white brethren, and in general, the deeper their color, the more valuable they are.

Fancy diamonds are usually cut to emphasize color rather than clarity, and they are often smaller than white diamonds.

Diamonds can be treated with heat to change or intensify their colors, but this makes them less valuable than stones with the same color that occurs naturally.

How Important Is the Color of a Diamond

When it comes to purchasing a diamond based on color, it’s important to look at ranges.

If money is no object, then, by all means, seek out fancy vivid colored diamonds or totally colorless white diamonds. But if you’re looking to get a similar impact for a lesser price, consider something in the fancy intense or G to J ranges.

In the end, you may be more satisfied with something you just like for a reasonable price, rather than paying a fortune for a stone that appears nearly identical without the use of a microscope.

Clarity is a measure of how clear or transparent something is.

When it comes to diamonds, there are two factors that can negatively affect clarity grade: blemishes and inclusions.

Blemishes may occur on the stone’s exterior and happen naturally, but they can also occur from the polishing process or from stress on the diamond as it is worn.

Inclusions are imperfections inside the gemstone and result from the irregularities in the atomic structure of a diamond, such as clouding or feathering. They can occur for a number of reasons, such as a volcanic eruption that brings the diamond to the earth’s surface or tiny mineral crystals that became trapped inside the stone as it formed.

Some diamonds have no blemishes or inclusions whatsoever, although this is so rare that many jewelers have never seen a totally flawless diamond.

For gemstones that do have blemishes or inclusions affecting their clarity, these marks are unique from stone to stone, like the birthmarks or scars on a human being.

How Jewelers Determine a Diamond’s Clarity

When a diamond’s clarity is evaluated, it is done under 10x magnification, an industry standard.

Attention is paid to the quantity, visibility, locations, and sizes of any imperfections, along with their possible effects on the stone’s durability.

Originally, there was no set scale to describe a diamond’s clarity, and many confusing and conflicting terms were used.

The current industry scale was developed during the 1950s by Richard Liddicoat, Jr., a former president of the Gemology Institute of America.

It consists of eleven ratings:

Major problems with a diamond’s clarity will be plotted on a grading report, and less significant imperfections will be discussed in the report’s comments.

Viewing this documentation may help you select a particular diamond. It’s especially important to pay attention to any internal feathering which could potentially cause the stone to crack depending on the feathering’s size and position.

How Important Is the Clarity of a Diamond

Remember that diamonds with very few or no imperfections are quite rare, meaning they’ll be much more expensive. So, if money is no object, or you have super human eyesight, you may prefer a flawless stone.

But it’s also important to remember that most minor blemishes and inclusions are invisible to the naked eye. More significant problems may be lessened or eliminated altogether at the hands of a good stone cutter. Or, a good jeweler can place an inclusion under a prong when setting the diamond. At that point, you’re unlikely to see these imperfections.

The cut is the only one of the four C’s that is determined by human touch.

The diamond cutter’s challenge is to create the most optically beautiful diamond without sacrificing size.

Symmetry and polish are the most basic but important considerations in regard to the technique of a good cut.

It’s important to note that a diamond’s CUT is not the same thing as its SHAPE.

Diamond shape refers to the basic outline of the shape of the stone, such as round, square, marquise, pear, etc.

A diamond’s cut determines how much light it can refract. Consequently, the cut makes a huge difference in a diamond’s sparkle.

Ideally, nearly all the light that passes through a diamond will be refracted back through the top of the stone instead of being lost through its sides and bottom.

In addition to the cut affecting a diamond’s sparkle, it may also improve or worsen the ultimate appearance of its color and clarity.

How Jewelers Grade a Diamond’s Cut

By the grading system set down by the Gemological Institute of America, a diamond’s cut grade may be rated:

“Excellent” rated diamonds are rarer and refract nearly all light that enters them back through the top of the stone.

Diamonds rated “Poor” lose most of their light through their bottoms and sides.

Since you see more sparkle with an “Excellent” cut diamond it may appear larger as well.

Take two flawless, colorless diamonds of equal carat weight. One has the ideal cut and the other is cut poorly.

Because of this, they sell for two very different prices.

How Important Is the Cut of a Diamond

The cut is probably a diamond’s most important characteristic overall. However, it’s also the most difficult to evaluate.

Trust your eye more than paperwork when it comes to the sparkle and brilliance you witness in a diamond.

When it comes to buying a diamond, finding jewelry that fits your preferences, or learning about how jewelry is created and evaluated, look no further than Copeland Jewelers in Austin, Texas.

Our wide selection, knowledgeable staff, and reputation for excellence in fine jewelry will ensure that you find exactly what you’re looking for.