No longer in the designer’s line, therefore, making this a great collector’s item for your favorite jewelry connoisseur.

You’ll love the high quality of this piece immediately because it’s expertly crafted in 18K white gold. In addition, notice the choice gemstones, with over a 1/2 carat of VS1, F color diamonds.

Turquoise is a birthstone option for the month of December.

Around the thirteenth century, the name originates from the French expression, “pierre tourques” or “Turkish stone”.  Therefore, it’s believed this gem first arrived in Europe from Turkish sources.

Revered as one of the world’s most ancient gems, Chinese artisans were carving turquoise over 3,000 years ago.  Likewise, ancient Egyptians wore turquoise to adorn themselves. Plus, it’s the national gem of Tibet. Known as Sky stone to Native Americans, it’s used as a ceremonial gem and was a medium of exchange.

Consequently, with such an exalted history you’ll find it’s long been considered a gem that guarantees good health, good fortune, and protection from evil. 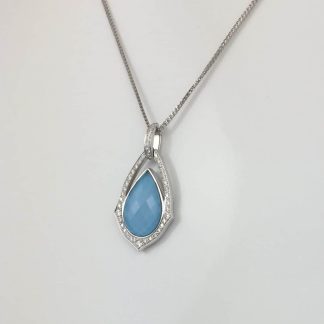