A Peachy Pink Garnet pendant adds a touch of modern with a dose of classic to give you a simply beautiful necklace. Highlighting a rare and collectible gemstone.

Featuring a dreamy and rare peach Grossular Garnet of almost 3.50 carats (3.47 ct.). Its romantic peachy color dazzles with just a hint of pink. Peach is a color you almost never see in garnets. This is an oval beauty from the collection of a master gemstone cutter who has spent a lifetime collecting special gems. As a result, notice the beautiful translucence and depth of color he captures within in its oval cut.

Superbly crafted in 14K white gold. Its modern halo design uplifts the featured garnet with brilliant, high-quality diamonds all the way around. In addition, small diamonds climb up the bail. Includes a protective and open under gallery behind the garnet. Therefore, light flows through the transparent gem revealing its full color.  Total diamond weight, almost 1/4 carat (0.24 ct.).

Grossular garnets come in almost every color, except blue. They can even be colorless. However, unlike other garnets, they’re rarely red or dark. Often light to medium in tone, they make brilliant, vibrant jewelry stones. – International Gem Society. 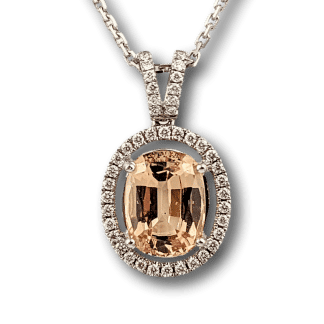