A Laguna Lace Agate pendant from our Copeland Custom Collection. Designed and created by Chris Copeland. A striking piece, with both a retro flair from the design and a bohemian feel from the large banded agate.

We’re in love with this creation! Featuring a large oval Laguna Lace agate. And for good reason, it’s the tight banding of distinct colors. Laguna Agate is the most colorful banded agate in the world. Therefore, it’s also the most highly prized. In fact, some of these famous agates can have over 100 individual bands per square inch. In addition, illusive color shifts in the banding are commonplace.

Finely crafted in 14K yellow gold. Designed with the astronomical stylings of mid-century modern art. Firstly, a sun is created by adding a gold bezel and five triangular gold rays around the agate. Then, orbiting our agate sun is a small golden sapphire and garnet on a carefully placed golden wire.

Operating about 150 miles south of El Paso in the mountains of Chihuahua, Mexico is approximately 15 small mines. Accordingly, Laguna Lace agate is named for its home, Estacion Ojo Laguna, or Eye Lake. Most of these small claims operate without the benefit of roads or machinery. Consequently, almost every Laguna Lace agate is excavated entirely by hand. Quite impressive!

Sometimes called the Rainbow of Mother Earth. Believed to shield your soul from negative energies. Considered an excellent stone for building and maintaining your physical health. 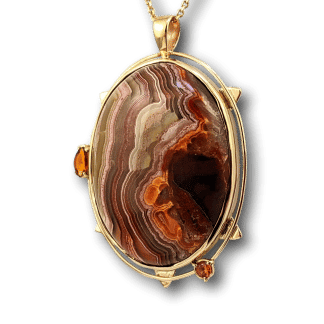