This piece of labradorite exhibits so much metallic color, like the Northern Lights during a storm.  When we saw this stone in Santa Fe, we knew it would make a fascinating piece of jewelry. And, it’s been crafted into a pendant that feels good to wear.

Labradorite has a dark smoky gray base. But shed light on the stone in a particular direction, and it displays striking rainbow-colored reflections. Usually in blues and greens or violets, and sometimes in yellows, reds, and oranges. Most importantly, the colors gleam with a vibrant, iridescent, metallic quality not quite like anything else. Therefore, this beautiful effect that is unique to labradorite is called labradorescence.

Labradorite was first found in about 1770 in Canada’s Labrador Peninsula. According to Eskimo legend, the Northern Lights were once trapped in the rocks along the coast of Labrador. When a wandering Eskimo warrior found them he freed the lights with a mighty blow of his spear. However, the stone still held a few of the lights within it. And that is how we have the visually stunning labradorite.

Believed to be a powerful stone that dispels anxiety, hopelessness, and depression. 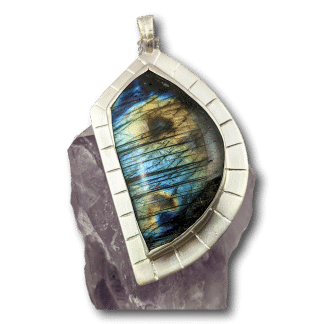