A shield-shaped timepiece, the Ventura is a faithful tribute to the original 1957 model, which made watch-making history as the world’s first electrical, battery powered watch.

This Hamilton Ventura Quartz watch in a stainless steel case and a 13mm dial is one of our most popular watches. This one’s a perfect fit for a smaller wrist and actually closer to the watch’s original size.

Originally designed in 1957, making history as the world’s first electrical, battery-powered watch. However, its retro style is still a futuristic-looking standout.

In addition, as a result of Ventura’s futuristic stylings, it’s the official timepiece of Men in Black agents all over the world. Seriously, Tommy Lee Jones, Will Smith, and Tessa Thompson have all worn the Ventura. The watch appears in all four episodes of the MIB series. As much a part of their uniform as the black suit and wraparound sunglasses.

It was also worn by Elvis Presley who can be seen wearing this watch in the movie Blue Hawaii.

Noted Hamilton historian, Jarett Harkness was quoted as saying, “I’m not sure how Elvis Presley’s White Gold Ventura got onto Blue Hawaii, but I imagine it was just because Elvis was fascinated with the watch and owned one, and it looked good for the movie”.

As a matter of fact, Presley owned many Venturas through the years and was known to give them as gifts. It sounds like the Hamilton Ventura may have been his favorite watch.

Most importantly, Hamilton’s early electric watches sparked the battery-powered technology of today’s high-quality quartz movements like the one used in this brand new Ventura. In addition, Hamilton is great about updating the iconic style as well. Occasionally creating a fresh take on this timeless piece. Today’s Ventura is a faithful rendition of the original history-making design. In stainless steel, 13mm with a black leather band. 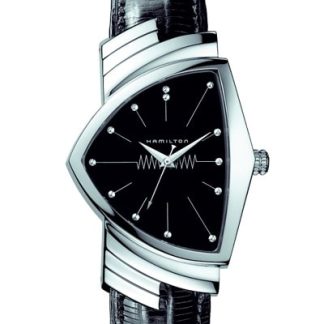