A garnet & diamond pendant in 14K white gold. A beautiful look at a beautiful price. Just in time for Christmas at a special offering, now at 50% off! Garnet is also the birthstone for January. So, this time around, make sure you take care of those forgotten January birthdays with this great buy.

This is a lovely pendant crafted in 14K white gold. The focal point of the pendant is a deep wine and winter red colored garnet. Cut into a cushion shape, the faceted garnet weighs almost 4 carats (3.80 ct.).

Next, is almost 1/2 carat (.22 ct.) of diamonds set beautifully around the garnet. Lastly, fine milgrain bead work around the outside of the pendant finishes out the design.

Garnets have been used since before the Bronze Age and in jewelry dating back to 3100 BC. The pharaohs wore them in ancient Egypt. A finely made necklace found at an Egyptian site proved to be over 5,000 years old!

Some believe garnet strengthens relationships and trust and inspires love. Another aspect of garnet is the idea that it promotes health and regeneration. On the physical level, some say it may guard against nightmares and inflammatory diseases. 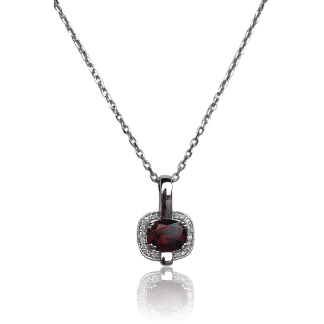